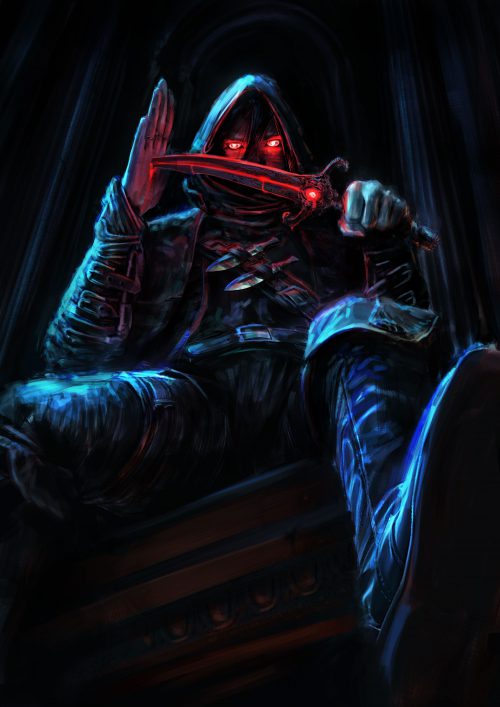 From a torn journal of traveling merchant Markus Enderthal; it is the only known account of the fierce rogue of legend, Trickstab:

“I was given permission to keep this journal and quill to write my memoirs, but I’m certain my quill will be dry before I’ve even really begun. I did not see the person’s face, for they were wearing a leather mask. I know only a name. Trickstab. She made sure that I remember, threatening a showcase of her talent.

I’m a traveling merchant within the Ala’Nora Woodlands. I sell simple goods, food, tools. Occasionally, I have weapons for sale, but it’s rare. My route never really changes, and that’s probably a mistake, considering where I am now. On this day, I was going to Two-Towns and back home again, but heading westward I had come across a band of mercenaries coming back from a battle; they carried weapons, armor, jewels, all manner of which I’ve never seen. They claimed to have too much (and did not seem bothered to keep their bounty) and as I cannot carry much, I could take only some gold, a few jewels, and a set of daggers with some kind of engraving on them.

The end of this tale is not a happy one, but not a sad one either. I heard only the sound of the wind in the trees, and the birds atop them. I saw no one around me, and I was certain to be alone. Seemingly coming out from the air itself, I heard a single step and to my right stood a slender woman, dressed in leather, her hands resting on her hips. She hardly spoke, or rather, said only what she needed to say. “Your daggers, I want them.” I felt a swift breeze on my arm, under which my bag was hanging. Looking down at my bag, I felt another breeze, and looking up again, she was gone. I examined the contents of my bag, and the daggers were gone. I shudder to think what would have happened if I had said no or tried to stop her.” -The ink fades and the writing becomes nothing more than scribbles…

Survivor is the best word to describe a rogue; they are always doing what they need to do to stay ahead in life with no moral compass holding them back. Anything is fair game, as anything of value is never given—it is taken. If they aren’t scheming in town, then they are diving through ruins looking for lost treasure and artifacts. Any rogue loves a well-planned heist, maybe even more than the value stolen, as the rush itself is addictive.

In town, they are usually found hanging around the shadier districts; either down by the docks, near the brothels, or in taverns. Nimble and quick, they can snatch your purse without you realizing it. They move through the shadows as they disappear out of sight. They are quick-witted and able to talk themselves out of any situation. And if that doesn’t work, be sure they have something else up their sleeves.

Rogues are fighters who use anything up their sleeve, quite literally, to get the advantage in battle. Rogues wear leather armor as it permits them to sneak up to their enemies unnoticed in order to get the jump on them. They prefer to use smaller weapons they can conceal quickly such as short swords, daggers, slings, and darts. They are exceptional at scouting out areas with their advanced stealth abilities, escapes, and expertise with traps. They are also proficient with the unconventional use of poisons in combat. Anything that can give them an edge is fair game.