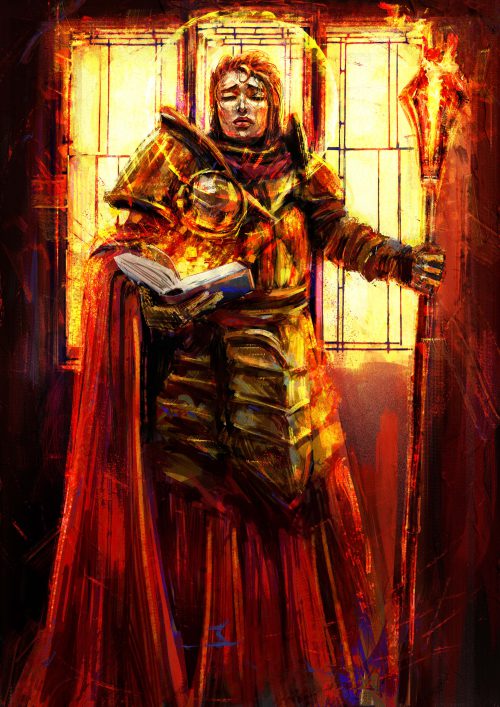 In an era long ago, The Immarikh Empire, inspired by the teachings of the Eternal Ray, led a campaign to unify the world through military force. A well decorated general and champion of the people, General Gwyvaren Zamaendis, was a war hero who had led countless successful campaigns across many lands.  Many thought him to be the divine emissary of the Eternal Ray, and in a way, he was—unbeknownst to many, he was a Godbrand. He fully embraced the belief that, through the Empire’s military might, other peoples could be forced to see the Eternal Ray’s unifying light and wisdom.  His military tactics were without peer and often were such a show of force and guile, that many kingdoms surrendered with little bloodshed. At the height of the Empire’s power, it largely went unopposed as it annexed territory after territory into its burgeoning borders.

The first real resistance would come from a region of the world inhabited by beasts. They had no organization to speak of; they were savages and anarchists.  The beasts were clusters of tribes and clans who had, before the Empire’s arrival, fought endlessly amongst themselves. With a common enemy in their midst, they turned to fending off the Empire. Their tactics were vicious, unpredictable and unorthodox. With countless forays into the region by the Empire with little progress to speak of, General Zamaendis was sent to the theater to coordinate large scale operations.

He would taste the unfamiliar bitterness of defeat as his enemies’ strategy was completely foreign to him. Furthermore, the guerilla warfare in which the beasts engaged was devastatingly antithetical to General Zamaendis’ tactics. As the war would continue to rage on for ten years, it exacted its toll on the Empire’s resources.  With the loss of half of their regional forces and most importantly, their reputation for being unstoppable, the Empire became desperate. General Zamaendis on the other hand had spent the last ten years spiraling down the path of zealotry, clutching to extremist doctrine he had formulated from the once pure ideals of the Eternal Ray. Years of harrowing battles had inexorably changed his mind. Now convinced the feral beasts would never and could never ascribe to the Empire’s promise of salvation through unity, he set out to destroy them. Having disposed of the fear of turning into his enemy, he finally embraced his enemy’s strengths and exploited their weaknesses in order to devise his very own merciless tactics.  Implementing a newly trained special force assembled from the Empire’s most resolute and dedicated soldiers, Zamaendis was finally able to rout the beasts once and for all.  What few survived, scattered and fled.

Prior to the end of the war and because of the tarnished image of the Empire from its protracted hostilities with the beasts, a series of opportunistic insurgencies sprouted in an atmosphere of civil unrest: People sought independence from the now fallible Empire.  Zamaendis, seemingly aware of the true source of the insurgencies, used his military and political clout to convince the Empire it had a new cunning enemy trying to destroy it surreptitiously from within. He called it the Dead Void and he was so convincing about its existence that the Empire granted him the resources for a new military branch for internal affairs. The soldiers of this new branch, called Inquisitors, were handpicked from the special forces Zamaendis used to conquer the beasts. Their sole purpose was to root out subversive elements inside the Empire by any means necessary. Zamaendis would become the Inquisitors’ sole leader and given the title: Rector.  Bestowed with the power of Judge, Jury and Executioner, the Inquisitors ruled the rebellious regions within the Empire with one thing—fear.

The Inquisitors most important weapons were not swords and crossbows, but fear, paranoia and hatred. Inquisitors were taught to blindly believe that the ends justify the means when it came to preserving belief in the Eternal Ray. As the Inquisitors adopted more extreme and unsavory practices, their development was all sanctioned by one man: Rector Zamaendis. It was he who signed off on their every move, devised their every strategy and it was his Inquisitors that held the Empire’s citizens in an iron grip.

Centuries have passed since the fall of the Immarikh Empire, but the Inquisitors survive to this day, albeit recognized widely by the name: The Dawnblades. The title of Inquisitor is now reserved for a rank of enforcer endowed with divine powers. Armed with the Zamaendian Doctrine and no longer shackled by the confines of the Empire, the Dawnblades fight an endless battle against the Dead Void.

As the Dawnblades have presences all over the known world, an Inquisitor might find themselves stationed in any number of lands. In some lands, they are tolerated and in others, they are met with great hostility. The Dawnblades are a large militaristic power that has a sizable amount of political influence and it is not uncommon for them to ally themselves with countries to deal with perceived threats. They are well known for their zealotry and the organization’s mercurial nature means that it doesn’t form longstanding political ties.

At its core, it is still very much a religious practice which attempts to unify all the gods under the umbrella of the Eternal Ray.  As such, it is very common for Inquisitors to do missionary work in towns and cities of all sizes. As missionaries, they are tremendously aggressive, even going so far as to accuse people of worshipping the Dead Void. In addition, part of a missionary’s responsibilities is reappropriating any lost scriptures or religious artifacts as they are considered paramount to the Dawnblade identity.

Individual Inquisitors regularly travel the world incognito in order to unearth new Dead Void machinations. It is not uncommon for them to enlist the aid of other adventurers when their comrades are not present. Dawnblades do have a rather robust information network as agents can be found in many cities. Additionally, Inquisitors are known to hide in the ranks of Temple Priests, so another Inquisitor may be nearer than one thinks.

The Inquisitor is a Healer who dons chain mail and brandishes flails and maces in the thick of battle. They are a front line combatant who infuses their weapons with divine power and heals nearby allies efficiently and effectively. They have decent survivability, but are by no means a tank. Inquisitors are also a competent mid-ranged combatant but their heals at this range are not as potent.  It is at this range that they can let loose divine elemental powers and where they sabotage enemies, making use of a collection of abilities referred to as Suspicions of Heresy. With enough Suspicion generated, the enemy is branded a Heretic and the Inquisitor can inflict significant damage to them.