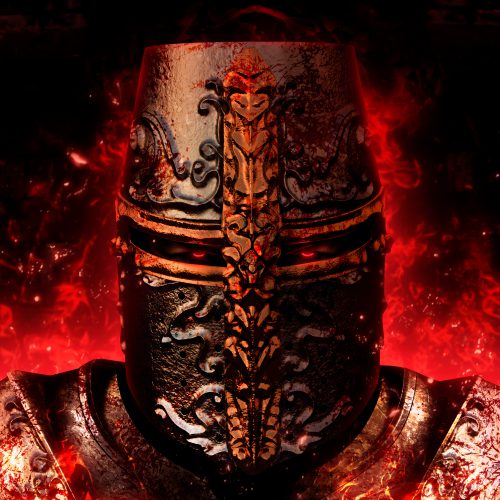 An account of Red Richter, from historian-barkeep Eritrea of the Southern Woodlands, who witnessed first-hand this event, writing in “Tales from the Barkeep: A Long History of Vigilantes and Lovers of Ale.”

“A man in armor, a knight, walked into the Bellowing Hag Inn late one evening, all the customers reared their heads towards the door, gazing upon a dark figure, muttering words of discomfort. The knight sits, orders an ale and rabbit stew, and gazes around the inn. The customers are staring about, and I hear the name Red Richter whispered under frightened breaths. He eats and drinks calmly. The chill in the air alerts his senses that something is not quite right – he squints his eyes as though bringing the room into deeper focus. He slowly stands, and waves his right hand, darkness ensuing. A phantom demon appears beside him. The customers panic, some aimlessly taking out their weapons ready to fight. Richter shrugs off their actions and immediately begins scanning the room with a detestable glare.

Most of the customers, seeing the intent in his eyes and his ready stance, flee, except for three men at a corner table. They stare unflinchingly in Richter’s direction. The largest of the three men takes a step toward, and immediately the phantom demon darts forward and begins attacking with its claws. Richter’s eyes glow as he whispers, this seems to confuse one of the other men, who starts walking back and forth, his hands grabbing at his head and yelling. The last man gets up, grabs his sword, and charges in. As the phantom demon starts to fade back into darkness, Richter grabs his axe, rigid looking with a peculiar curve along its shaft. Richter appears to swell in strength as his axe slashes with increasing force, becoming more animated than anticipated. The phantom demon fades into a fine, black powder that burns the eyes of the men around it, and swiftly Richter slams his axe into the chest of one of them. The man screams in pain to the sound of cracking ribs as Richter sadistically pivots his axe in the man’s chest cavity.

The confused man regains his composure and charges towards Richter, but before he knows it, Richter pummels him with the the bottom of his axe, a sharpened fine point. Driving him back into the corner as Richter drives the pommel into the man’s face, his head hitting the wooden wall. The third man comes from the left, striking a blow on Richter’s shoulder, which sends him two steps to the side, but that works in his favour. He repositions himself and strikes at the man, swinging his axe over his head and striking the left shoulder. From behind the counter, I stand to take a better look at Richter, who is now at his table, taking a final swig of ale, and a final bite of stew before looking back at me. He says in a deep, guttural voice: “I apologize for the mess. Great ale. Superb stew.” He leaves and never again has he returned.”

Blackguards are vicious warriors who serve as the power outlet of their masters, The Black Lotus. The embodiment of power and control, they play off the weaknesses of their foes to subdue them to their will. Manipulating their enemies at the very core of their emotions, if there’s a vulnerability they’ll find it, twist it, and cripple them. This art is taught by the Black Lotus’s ten temples of influences called Kryptagoras, one for each of the weaknesses they master to control.

Blackguards are treated with a mild neglect, a denial of their existence with incommodious laughter. It is ill advised to provoke a Blackguard, or to directly insult them, as they won’t hesitate to bring one to their knees. Commanding powers utilized by other worldly demons to terrorize the mind. It’s no wonder they are unchallenged as they do their bidding throughout Myr’Nora.

Blackguards are hybrid fighter-warlocks wearing plate armor. Unholy knights who are proficient at delivering crushing melee attacks as they twist and warp the minds of their enemies. Exceptional tanks and able to keep the attention of a single target better than any other class. Siphoning energy from the enemy in order to empower themselves, adding to their longevity in combat. Additionally, they command other worldly powers to summon phantom remnants of demons to aid them in battle. These demons torment the minds of the Blackguard’s foes by applying an exploitable resource known as “Marks of Influence”.