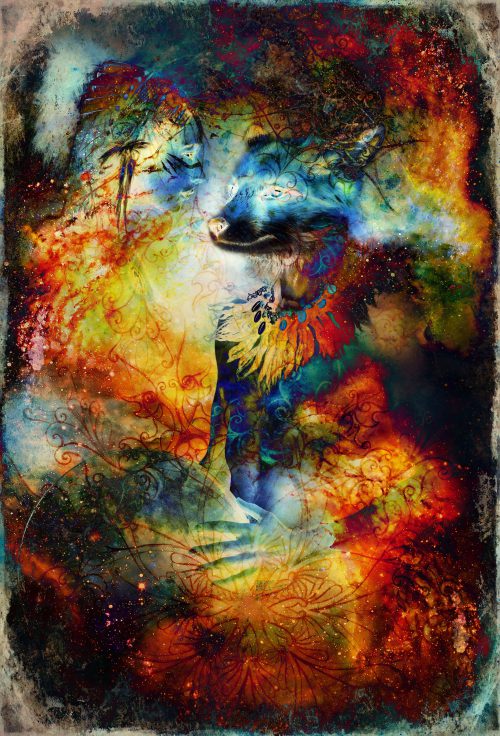 An excerpt from, “A Brief Treatise on the Origin of Dreams” by Persai Awdemmari, Theosophologist

“The First Breath is the name of a creation myth passed from Wayfarer to Wayfarer. It begins with the Aiyeni who were paradoxical beings born of Ghaluk Daiyun, but who also created it.  Ghaluk Daiyun, also known as the Dream, was the dominion of the Aiyeni. It is said that they conceived of the cosmic child, Sferia, who was not of the Dream.  Sequestered in a womb on the precipice of the twin voids and nourished from the sustenance of order and chaos, the cosmic child gestated for a period of time known as an Ehydj.  When finally born, she was a dull, lifeless husk. The Aiyeni gifted her a cornucopia of fruits from the Tree of Creation, but she did not eat them. They brought her to the elemental fountains of the void, but she did not drink. They swaddled her in their aspirations and expectations, but she did not thrive. One of the Aiyeni, Halar Mruhz, the most matronly among them, embosomed the lifeless Sferia and pierced her chest, feeding the child her own vitae.  While this brought color and vitality to the child, she did not stir of her own accord.  Halar Mruhz respired deeply, inhaling the Feth Ghalukia, or Ether of Dreams, and exhaling it into the cosmic child. With this First Breath, Sferia began to dream. When she began to dream, she began to live.

Many theosophologists overlook how Wayfarers value this creation myth, often focusing on their own interpretations. I have found that most Contemporary Wayfarers believe this myth to be an explanation of why the world of Dreams spans Myr’Nora. They believe that the Ether of Dreams is thought to be a unique substance that makes up Ghaluk Daiyun—more commonly known as Dreamhaven. Sferia—an archaic name for the plane on which Myr’Nora resides—breathes in the Ether of Dreams that is provided to her by the Aiyen, Halar Mruhz. This life-giving act is what animates Sferia and connects her to Dreamhaven. This wasn’t a one time affair with Sferia taking one big breath and holding it for an eternity either.

For instance Shamans, the most well known Wayfarers, have set forth in their tradition that Sferia can only continue to “live” as long as she breathes the Ether of Dreams, presumably from Dreamhaven itself. Shamans, on the whole, consider Sferia’s act of breathing to be a metaphor for the influx and efflux of spirits as well as dreams to and from Sferia.  To them, the ‘breath’ is without a doubt the animating force of life and without it, we would cease to dream and no new life could be created. Evidence of the paramount importance of ‘breath’ is present in the common Gargant Shaman greeting, “Sif Kusaq gdel mar,” to which the response is, “Ith Kusaq Ifis b’rar.” This phrase and variants of it from Shamans around the world originates from an ancient language once spoken by all Shamans. It dates back thousands of years and meant, “I dream from the First Breath,” with the reply being,”I dream to the Last Breath.” My research suggests that while the first and last breath are of great importance, the ‘breathing’ and therefore ‘dreaming’ are a part of an ongoing process, which I suppose one could call cosmic respiration. As long as this cosmic respiration continues, spirits of Myr’Nora will continue to dream. So what precisely is dreaming to a Shaman?

Gargant Shamans have a part of their tradition that they call, “Tirduh Fuuth B’zahi” which means, “Traditional meant for all,” or simply Open Tradition. It’s counterpart, “Tirduh Fuuth Sh’mini”, means “Tradition meant for Shamans,” or simply Shaman Tradition. Every extant Shaman tradition bears this concept, though the more xenophobic ones don’t share their Tradition with outsiders. Shamans are exceedingly protective of the Shaman Tradition; attempts to learn it can be met with aggression. However, the open side of their tradition is still rather informative for those willing to learn it. In the open tradition, it states that the Ether of Dreams is essentially the prototypical matter from which dreams are made. When one enters a dream state, the spirit acts like a seed crystal and the Ether of Dreams crystalizes around it, creating a thin crystalline thread. The Ether itself is not uniform, but comprised of fundamental concepts that speak to the spirit such as the abstract, “Love, Remorse, Awe, Optimism, Contempt,” or the concrete, “Home, Store, Library, Shield, Table, Book,” or the relational, “Brother, Sister, Father, Mother, Friend, Enemy.” As the ether crystalizes, the spirit perceives these concepts and ascribes more specific elements such as the Remorse that only that spirit feels, the Home that only in which the spirit has dwelled or the Mother that only that spirit has known. Once a dream is experienced, the crystalline thread detaches from the dreamer and is cast off into the Ether of Dreams. It then makes a journey from Myr’Nora back to Dreamhaven where it becomes an integral part of it. Per the Open Tradition, this is what it means to dream. I can only infer that Shamans and Wayfarers must have a greater control over dreaming which leads me to pose the burning question, “What sort of grand dreams do Wayfarers or Shamans have?”

Shamans’ talent as Wayfarers is rooted in the divine. It is precisely this power that allows them to weave dreams and communicate with spirits, something that is outside the grasp of other Wayfarers. Shamans reside in cultures that still function under belief structures and superstitions of old. It is in these small often-isolated communities that the complex and esoteric practices of the Shaman continue to be cultivated to this day.

Shamans monitor and shape the dreams of those around them and provide direction to wayward disembodied spirits. They have a particular affinity for the spirits of nature and are known to call on them for guidance. These spirits can, though not always, simultaneously inhabit a corporeal body and roam the Ether of Dreams. As a consequence, spirits generally perceive the world in ways that are different from humanoid races. Through a bond of dreams, Shamans can tap into the perspective of spirits, as well as the guidance it provides. Additionally, the bond allows the Shaman to call upon the spirits aid in times of need. It is for this particular talent that Shamans are typically recognized.

Shamans who venture out into the world, often do so because of the Calling. The Calling is a profoundly spiritual dream that gives the Shaman a greater purpose. It is this Calling that has coerced Shamans into places far away from the lands from which they originate. In some cases, the Calling is for them to take up an important role in the world and they take up residence in cities as wise ones, as sages in the service of Wizardly Consortia or even as council to Kings or Queens. In other cases, the Calling is an ongoing journey to lands far and wide, explaining why many perceive Shamans to be itinerant.

Donning the leatherwork from their tribes and bedecked in myriad Shamanic trinkets, the Shaman is a priest who employs a selection of Spirit Companions with whom they have formed a compact. A Shaman interlaces dreams together creating Lace, which also function as their spells. As they cast them, Lace is woven into the Dream Weave. It is from the Dream Weave that the Spirit Companions are able to affect the waking world. The cadre of Spirit Companions a Shaman selects, influences the Wayfarer’s role in combat. Shamans and Spirit Companions work in consonance with one another to tend to allies’ wounds. As such their combined  healing talents are exceedingly effective. Additionally, Shamans can bolster allies’ combat prowess and hinder enemies, while their Spirit Companions coordinate attacks with allies in close quarters combat. When not tending to allies’ wounds, the Shaman’s ability set makes them particularly effective at dispatching foes.