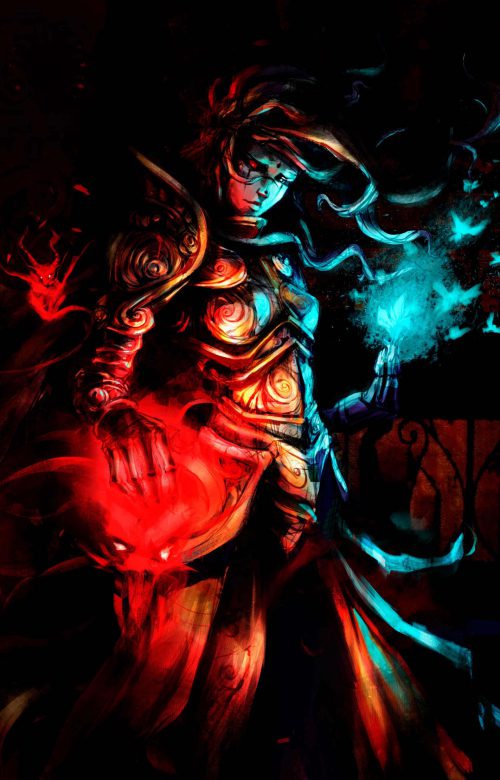 “Upon waking up at the altar, I realized that I must have blacked out. I dreamed of falling. It was an endless fall through a black abyss with the intense feeling of burning upon my flesh. I had no idea how much time passed. As I staggered to my feet, I could recall no memories of my whereabouts. I found a discarded bag that lay on the floor near the altar. When I reached into it, I only found only this journal and a single leather mask—a mask worn by a court jester but tattered and sagged on one side. I stumbled over to a nearby pond of water to see a reflection of myself…… myself? Wait, what is my name? Who am I?”

“After traveling for some time, I found a group of merchants heading towards Silverwood. They introduced themselves as Salvados, Malcolm, Lennar, and Winston and informed me of today’s date. I told them the only name I could muster up, Noah. It was a name I remembered from the children’s bedtime story about the traveling minstrel who spread cheer and goodwill to all he encountered. They were kind enough to share their food along the way as I shared tales of adventure and sang songs. Something that was oddly natural for me…. maybe my memory is coming back to me?”

“Malcolm just woke up in the middle of the night and beat his son Lennar to death with a rock. He wouldn’t say anything other than grunt and scream, and when I looked into his eyes, it was clear there was no one home. This was a strange night and we now have him tied up in the wagon for the rest of the trip.”

“I don’t know what’s going on with these merchants but I had to abandon them at their camp. Salvados chopped off Malcolm’s feet with an axe and Winston just stood there laughing as he did it. I didn’t find this amusing; it was horrific. I’ll find my way on my own. I have some provisions to last me for a while.”

“I made it to Silverwood just as a snowstorm rolled in. I was lucky that I stumbled across the Quivering Quail Inn. The Innkeep was generous enough to lend me a lute so that I might perform for their patrons in exchange for a meal. Lord Emberney was so pleased with my performance that he invited me to stay at his manor. Finally, a nice warm bed. Maybe after a good night’s rest, I will remember who I am. But for now, I am Noah Finkerson, the traveling bard.”

“Poor Lord Emberney has fallen on some hard times recently. Yesterday, Lady Emberney jumped to her death out of her bedroom window with no warnings whatsoever. Even more strange is that today, the cook along with the servants hung themselves in the cellar. Their lifeless faces all wore strange, quirky smiles upon their faces as if they had enjoyed hanging themselves. I think I’ve overstayed my welcome here and have since gone on my way. I got passage on a cargo ship heading south and the Captain was kind enough to let me take up quarters in the cargo hold for next to nothing. Maybe the fresh ocean breeze will awaken some memories.”

“It’s been awhile since my last journal entry as the cargo ship was overtaken by pirates. The entire crew was killed, I was spared but was tied to the front of the ship for some time. After a couple nights of singing chants, the pirates were pleased with my songs and untied me, allowing me to join them. Captain Redtide seemed pleased with my music as well. Things have been pretty smooth since then and everyone leaves me to myself as long as I entertain them.”

“Half the crew has gone mad! In midday, they just got up and jumped off the ship in laughter. Everyone is very confused about what happened. The remaining crew have since concluded that Captain Redtide is cursed. So now there’s mutiny on the ship and Captain Redtide has since been jettisoned. Nonetheless, the ship is under new leadership and my position hasn’t changed. The best thing I can do is just lay low and hopefully, we’ll be back in civilization soon.”

“Finally, we reached the city of Dale. The pirates were overly generous with their remuneration for my services and paid me with a backpack full of gold. I didn’t second guess their judgment and went right on my way. I was able to afford one of the best rooms in the city. I better get to bed early so I can have a fresh start tomorrow. Noah Finkerson, the world awaits you!

…..Oh dear, someone just jumped into the well outside.”

Bards, in essence, are Sorcerers, practitioners of spellweaving at its finest through the subtle art of their music and performance. To their advantage, they are often not identified as sorcerers as their incantations and intent are easily disguised through their natural affinity for the fine arts. Because of this, they aren’t branded with the social stigma of “World Breakers”, a derogatory term used for most sorcerers. And less attention from the Order of the White Lotus or the Mage’s Arc is only benefiting. However, this also makes them quite dangerous as their corruption from the use of sorcery isn’t revealing or obvious as they pluck the strings of creation to manipulate, deceive, and bend minds to their will.

Nonetheless, they are a welcomed addition to any party as revered entertainers, lessening the burden of travel, adding in the spice of life, and keeping up the spirits of their allies. While not all musicians are Bards in Myr’Nora, all Bards are most definitely musicians. A Bard’s crafty mind also makes them ideal in a pinch, allowing their allies to survive otherwise unlikely odds. Their masterful use of manipulation with the boosting prowess of their music can turn the tide of any battle. If ever in trouble, there’s never a reason to not want a Bard on your side; even if they do come off as a bit unhinged at times.

Bards are a melee support class who wear plate armor and are the spitting definition of a “jack-of-all-trades”. They twist their spells as “songs” in order to gain an edge in battle, aiding their allies with masterful benefits while at the same time causing chaos and mischief to their enemies with battlefield manipulation. Bards carry songbooks that hold a number of song components they can use to craft their own songs. Mixing and matching tales, basslines, melodies, rhythms, riffs, solos, paradiddles, and other musical components they discover along their travels, making every Bard as unique as it’s player and their adventures, but without the carpal tunnel at the end of the day.