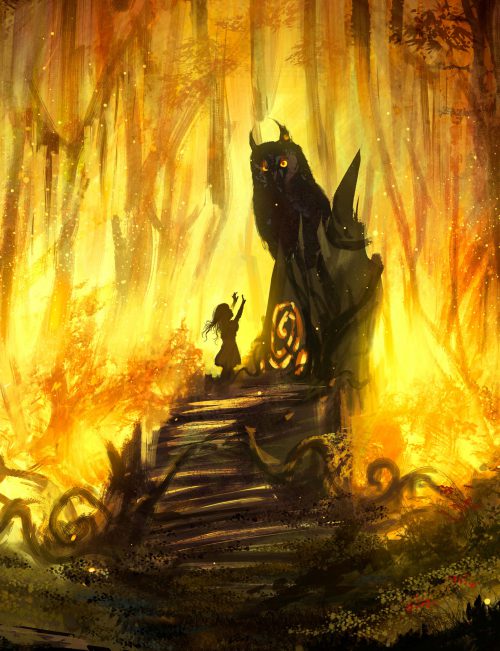 Dreythan slams his goblet on the table, ale splashing over his hand and on to the floor. The other adventurers at the table flinch.  Dreythan reiterates, “I tell you it was a Werewolf… and a Werebear, but…” Gianna, sitting adjacent to him, attempts to assuage him, putting a consoling hand on his arm, “Lycanthropes and Arktothropes are two different things Dreythan. A person can’t be both.”  Dreythan proclaims loudly, “Then he was a shapeshifter and he could speak with wolves and…” Madracin who sits across from Dreythan looks at him disapprovingly. He interjects, “Tell us again where you found him, and try not to sensationalize like you did the first time.” Jarnad, who sits beside Madracin, takes a drink from his stein, eyeing Dreythan.

Dreythan looks at all his associates wide-eyed. For that matter, other patrons at the Inn have taken notice of the ruckus he is causing. The other people at the table peer at him expectantly; Madracin stares at him judgmentally. He restarts the story, “I swear I’m not making this up like I kinda do sometimes. I mean…”  He takes a breath, calming himself just a bit. He begins anew, “I was on the south side of _________ forest. My employer had set some newfangled traps to capture some wolves that were coming out of the woods, terrorizing the farms, killing their livestock.” Dreythan takes a drink from his goblet. He continues, “These traps were put together by some well known Tinkerer in the area. They were placed just below ground and would lure wolves with some fake lamb.  I mean the lamb looked real as can be, but the whole thing was a mess a’ gears under wool. Thing even sounded real.” Madracin begins to roll his eyes at the extraneous details. Draithin takes notice; he is momentarily interrupted. He clears his throat, “So, we check each one of these traps one-by-one. The first trap caught nothin’. The second and third ones—one wolf a piece. We were simply instructed to hit a button on the trap that would cause it to collapse and squeeze the wolf inside to death. I mean, I felt kinda bad doin’ it. These wolves did not look like they were eating well. They were both emaciated. But, push the button we did and that trap would go whirring, bars collapsing into one another.” He frowns as he recalls the image; he is discomfited, “Then the wolf, slowly pushed to the center would have the life squeezed right out of it by the collapsing trap. Afterwards, the trap would reverse course and we would fish out the lifeless furry sack of bones. We were instructed to make sure no clothing, jewelry or personal effects were found near or in it, which led to a bloody mess of a dissection when we undoubtedly found nothing on the outside.”

Gianna, still disturbed in spite of hearing this story a second time, asks, “Dreythan, I mean it’s quite obvious you were sent to look for the Lycanthrope but your employer didn’t tell you. Did you have any idea? Didn’t you find it odd that you were looking for personal effects?” Dreythan looks at her considerately and ponders for a moment before replying, “No. I just had assumed that the wolves had eaten someone or part of someone. The people probably wanted it back. I mean, when a job pays well and you find yourself looking through the guts of a crushed wolf, you kinda reason, ‘Yeah, I’m getting paid to kill wolves and look at their innards.’” Gianna looks into her drink, “I see.” Dreythan nudges a barmaid who is helping another patron, “Hey Goldie, can I get another of the house ales.” She turns to him and addresses him familiarly, “Sure thing hun. Be right back.” She turn back to a patron she was already helping, “Are you sure there’s nothing I can get for you…” Dreythan eyes the other patron who is cloaked in white, turns back to the table and puts down his empty goblet. He reflects for a moment, “Where was I?” Jarnad casually replies, “You were talking about a well paying gig.” Dreythan regains focus, “Ahh yah. So, we get to the third cage. Only this one has four wolves inside. Two emaciated ones, one white wolf and one black wolf. The black wolf has this remarkable ice blue stare and unlike the other three, doesn’t stir when we pulled the camouflage off of the trap. A couple of the guys start to talk about how they are going to take the white one’s fur as it will fetch a pretty penny on the market. It turns to them and begins to do this ridiculously deep throaty growl as if it knows what they are talking about. Something triggers in me and I start telling them we have to go. Then both guys start goading the white wolf and they don’t realize it but the black one starts to stare at them. It was twilight, but I swear those cold blue eyes were glowing. So, they just up and push the button but the trap does nothing. As if a trigger for the black wolf, he howls. Then all the wolves in the cage howl.  And then, all the wolves in the surrounding area howl.”

Dreythan becomes more animated as the story gains an element of tension, “Some of guys panic when they hear the chorus of wolves howling and unsheathe their weapons starting to thrust at any wolf they can hit in the cage-trap. Other guys start to run. I mean we were ten in all and there we were 4 running, 5 skewering the wolves and me trying to take command of the situation. None of the guys listen to me as I try to tell them to stop.” A tavern patron behind Dreythan starts to laugh loudly. It momentarily interrupts Dreythan’s story, but he resumes, ”Then the black wolf keeps on timing these jumps trying to break free of the cage. The other wolves have all been nicked or sliced and there’s wolf blood everywhere. The poor white one is splotched in crimson. Then the black one howls again, just barely out of reach of the guys’ swords. Only this howl is different, it drops octaves and transitions into a roar as his body doubles in size and transforms into that of a bear. The guys are startled by the transformation and stop for a brief moment, but instead they are invigorated by the bloodshed of the wolves. I try to convince the guys we have gotta go, but they ignore me again.” Once again, Dreythan is interrupted by the laughing of the patron behind him. Dreythan casts a brief glance behind him, but ignores it and continues, “The black wolf turned black bear approaches the cage perimeter and roars, stunning the guy who was ready to strike him. In mere moments, he uses both paws in a very human way. Placing them in one gap and pulling two parallel bars apart from one another. The cage creaks and groans for a moment then splinters, a big gaping hole big enough for the bear to exit. I swear he slinks out of this thing, becoming briefly smaller and then resuming his bear stature. The guys barely have a chance to react as he starts to rip into them. I then turn and run. I run for my life. I can hear the blood curdling cries of men as they are torn and shredded. I make it back to the nearest farm and ask to buy one of his horses and then made my way back here. I tell the farmer what has happened but he doesn’t believe me.” A patron behind Dreythan laughs raucously; it is forced and unsettling. Dreythan realizes that it is directed at him. He and his associates look towards the patron who seems to have a screw loose. It is the man wearing a white cloak. He rises from his table and turns directing his fake laugh at Dreythan. The murmur of other patrons conversing has dwindled as many of the tavern patrons have turned their attention to the cloaked man.

The man exclaims, “Your story has a few flaws my truth bending friend.” Dreythan, now facing the man, is trembling, but doesn’t seem to know why. The cloaked man pulls back his cloak to reveal a handsome man with cool blue eyes. His hair is jet black. He continues his interjection, “You tried to run initially, but one of your colleagues threatened to gut you where you stand. Instead you sat on the ground and I believe you started to cry.”  Dreythan begins to involuntarily whimper. The man makes a small hand gesture of confirmation, “Yes, a bit like that. I must say, little girls and boys have more courage than you. Only when I began to free your men from the contemptuous lives they lived did you find the opportunity to run. Also, you didn’t notify the farmer of the wolves. Quite contrary, you made no effort to contact the farmer. You stole a horse from a family of six with no father or husband to speak of, leaving the stall open so the rest of the animals could flee.” Dreythan is fear struck, incapable of looking away from the man’s piercing gaze. “Dreythan, my friend,” the man says with a tinge of mock familiarity. He continues, “… even deer are not so dumbstruck as to stand still in front of a wolf… or a bear… or a tiger…” The man places his hand on Dreythan’s shoulder, it spontaneously sprouts white fur with black stripes as it transforms into the paw of a tiger. The man smirks, “Shall we pay a visit to your employer?”

Primals have been around since the dawn of time, even older than the First Borns. They are of an ancient magic created directly from the Tree of Life. Primals have their life essence “shared” or “bonded” with another life force. This link develops a strong relationship between the Primal and whatever their life essence is twisted with. Usually this bond occurs with closely related animals such as wolves, bears, and the such. Commonly, upon first impression they can often be confused with Lycanthropes, contrary to belief, is a misunderstanding. Primals are more of a kin to their bonded animal, sharing memories of even their ancestors.

Within Myr’Nora, Primals prefer to live on the outskirts of civilization, closer to nature. Since the Great Migration they are rarely seen as not many people venture into the wilderness outside the protection of Tok. But some do dwell within Tok in its remote areas, watching over their flock, and protecting them and the land from any harm that would be done to it. Primals refer to themselves by their bond such as Wolfkin, Bearkin, and so forth. Primals make excellent companions for anyone wanting to venture out into the wilderness as their ancestral knowledge of the lands and keen senses mitigates dangers. Along with their ferocity to fend off attacks makes them a welcome addition to any party.

Primals are a unique hybrid class focused around their primal pet with unarmed martial abilities and spellcasting. Alongside their chosen kin, they are savage fighters making melee attacks with aspects of their primal pet. Sharing a bond with their pet means they share life forces allowing them to focus and adjust to fit their combat needs. Their bond also allows them to share buffs with one another, acting as a single unit within groups. A Primal’s kit also consists of support spells they can utilize in combat as well as outside of combat.