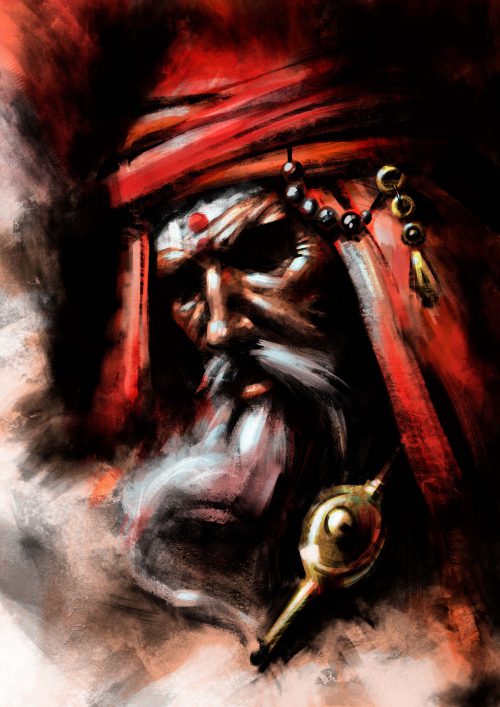 It is the dead of night. My legs drag as two flanking Royal Guards haul me through the hallways of the palace. I let them believe I am unable to walk. I’ve just finished infiltrating their blood, but, with them, I will bide my time. Courtesy of the Captain of the Royal Guard who trails us, I bleed from a gash in my leg; the loss of blood is negligible. The guards are moving at a breakneck pace and I’m having trouble turning my head to see the Captain. I devise a plan.  I can’t risk them learning of my talents. I must continue to employ subterfuge. As my blood paints the ground, I furtively compel it to spread out widely to chance having the Captain step into it.

We round a corner and the Captain makes contact with my blood. I can feel the bottom of his boots and where he is in relation to me.  I coax more of my blood towards the Captain under his notice. My blood travels up his boot, through his sock and bores through his skin.  He doesn’t react. Unlike the guards, his blood is stale. I intuit that a large parasite is consuming him from the inside. I invade the parasite and pry into the secrets of its lifeblood. It now shares the Captain’s memories, but it’s own memories, they are inscrutable to me. The parasite is a fascinating specimen.

As the hallway widens, the absence of servants, other guards or anyone else is conspicuous. I retreat into my mind. I begin to retrace over my steps from the past four days. Of note are five instances where my sanguine resonance sensed an overwhelmingly powerful bloodline. Two of the times I was conversing with my employer, the High Lady Kaleeda from house Tirmadje. I wonder what the relationship is between the force and the noble woman. I suddenly am aware of an intrinsic similarity between the force and the parasite in the Captain.

The guards stop at the door to the throne room and the Captain overtakes us; he begins to open the door. I momentarily wonder if the king wants an audience with me. I am instantaneously disabused of the notion as I am greeted by a scene of abject carnage.  I gaze at lifeless bodies of Royal Guards and liveried servants that litter the floor, bathing in pools of their own blood. Many bear countless lacerations and gashes over their bodies. Whatever did this, shredded garments and peeled away plate armor like it was cloth. Three guards stand to either side of the throne, unfazed by the state of the throne room.  I can see a woman sitting atop the throne; it is the high lady Kaleeda. She sits atop the throne with queenly poise. To her left, crumpled in a heap is the body of King Gavrin III. I begin to understand my role in all of this.

The guards carry me towards the throne. My right leg slides through a pool of blood from a dead guard. I decide to do a blood dive.  My mind is briefly transported to his final moments. I become him.

Blood curdling cries fill the air as I square off against a floating monstrosity. It’s a black and indigo mass of writhing tendrils that whirl like a many-armed dervish; the tendrils cut like swords and pierce like spears. Two women stand behind me, finding me as their only protection.  It emboldens me.  Other black masses float about the room, mutilating helpless servants and striking relentlessly at guards. I barely deflect two attacks from the mass in front of me. I can’t find an opening to strike. In the fracas, I notice my Captain to my left tangled in a mass of tendrils.  He screams as his face contorts into a rictus of terror. He begins to gurgle as the tendrils forcefully invade his gaping mouth. Within moments, the writhing mass contorts its way into the Captain’s body, disappearing; he stands there motionless.  I am stricken with horror. The brief distraction makes me miss a step and I barely deflect an attack, but am surprised by a resounding clank near my feet. The blade of my sword has broken off and there is nothing left to block the imminent attack. I turn around to shield the women with my body only to find that another black mass looms over their lifeless bodies. I feel the life-terminating strike of tendrils across the back of my neck.

I am myself and regain focus moments before the guards stop about 20 paces from the throne. Kaleeda tilts her head back and examines me for a moment.

She speaks, “Master Alvemonis, I see you found what you were looking for.”

She is the picture of serenity. It disgusts me but I don’t let the emotion touch my face.

I reply genuinely, “Yes. I did and I’m assuming you were aware of that fact?”

A brief saccade of her eyes to my right betrays the presence of another party in the room that I cannot see. I feel a brief flicker of the powerful presence, her likely coconspirator and the probable source of the black masses in the fallen guard’s final memory.  I contemplate tapping into the Captain’s senses, but I don’t want to show my hand.

Kaleeda smirks wryly and rhetorically poses a question, “And so you located the Prime Archivist, Siphoea Aldrus. In her possession, you found the articles of Ascension?”

I correct her, “I tracked the Prime Archivist down and when she tried to flee, I felled her with an arrow. I recovered the articles of Ascension from her person moments before the Royal Guard attacked and apprehended me.”

The high lady gestures for the Captain to approach the throne. He does so and proffers documents which he extracts from a satchel that he confiscated from me. She takes them and flips through the pages. The documents prove that King Gavin’s adopted daughter, Alraya, is in fact of his ilk. He never wanted the Queen to know of his infidelity, but wanted a blood relative as successor.  She hands back the documents to the captain.

She intones, “Burn them.” She then candidly adds, “I won’t be needing your services anymore Master Alvemonis.”

The Captain walks to a nearby tallow candle and sets the documents on fire. I deliberately react, showing the high lady I knew exactly what the documents contained.

She peers at me intently, but addresses the two guards next to me, “Execute him.”

I channel a modicum of power into the two guards, placing their blood in stasis. They do not move. Kaleeda’s fragile visage of serenity breaks in an instant. Mania paints every corner of her face.

Her voice booms, “I said execute him!”

The Royal Guards to either side of the throne take action, unsheathing their blades and approaching me. I stand on my two feet while I apply a compulsion to the two guards I have in stasis. They let go of me and go to interpose themselves between me and the incoming threat. I shape their blood into lance-like protrusions of crimson that burst out of their arms. The powerful force behind me comes out in full force, certainly aware that something is wrong. I now know it for what it is: a greater demon. I trigger a contingency in the Captain; I have full control over him and force him to engage the demon. I catch a glimpse through the captain’s eyes.  The demon is a shadowy ocean of tendrils with indigo veins flowing through a gaping hole in the castle floor. The Captain serves his purpose as a momentary distraction for it.  I exert control over the mass inside of him. The demon is surely surprised by the feat. I coerce the mass inside the Captain to burst through his chest cavity to attack the demonic coconspirator.

In the confusion that I’ve created, my eyes lock with the high lady’s and she mouths, “Bloodmage!” in disbelief.

I vanish into the trail of blood I left on the floor. I instantly travel all the way back to where I was initially wounded. There I see Siphoea and I awaken her from her sanguine torpor. She opens her eyes and panics for a moment as she clutches her pocket, finding a copy of the documents of Ascension. The princess’ claim to the throne is safe, presuming there is a throne to claim.

I lift her up by the arm and say, “We must go. You were correct. She is working with the greater demon, Talthamandrathus.”

Bloodmages are feared and scorned the world throughout. They tap into the forbidden taboo power hidden in all blood.  It is not uncommon for Bloodmages to be mistaken for Necromancers despite the obvious differences between them. Bloodmages are not unlike other Sorcerers as their alignments are fairly evenly distributed over the spectrum of good and evil. To avoid being ostracized, Bloodmages typically forgo ostentatious powers in favor of the more subtle powers of the blood. However, Bloodmages of the wreckless or evil persuasion often brandish their powers out in the open to invite confrontation.

Their unique talents make them well suited for the forensic arts and many are employed when crimes go unsolved. Bloodmages are also at times, healers, capable of healing all manner of illnesses. In spite of all the good they are capable of, there are the Bloodmages who have manufactured great plagues and subjugated entire peoples. It is their history that stokes the flames of fear towards Bloodmages.

Most Bloodmages are part of a secret organization called the Brotherhood of the Crimson Chain. Each Bloodmage has a unique mark that identifies them and they will often leave the harmless mark in the blood of passersby when they wish for others to find them. The brotherhood has entrenched itself clandestinely in many cities, providing sanctums that Bloodmages can retreat to.  It is through these sanctums that Bloodmages find employment for which their talents are well suited.

Bloodmages are spellcasters with a tremendous capacity for healing allies and harming foes. They are able to sense latent magic in the blood that courses through the veins of all living things. Through sanguine resonance, they perceive exactly what others perceive.  They are also able to extract the blood’s many properties, adding them to themselves or others.

Marking willing allies, called priming, they are able to transfer life between party members through a second health bar. They treat the health pool of their entire group as a resource, bobbing and weaving life as they see fit or even sacrificing themselves to give immediate healing to others. They can siphon life from their enemies, boil their blood, or weave their blood into torturous spikes. They can even teleport between bodies as though they were portals or swap places with enemies.