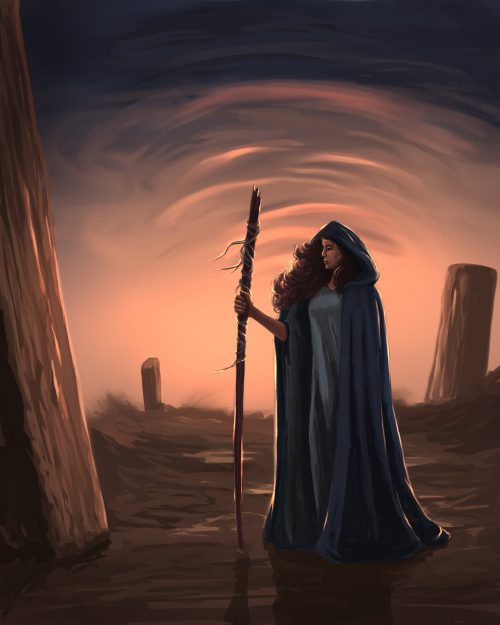 Contrary to the commonly accepted creation myth of Myr’Nora, Arborists understand there to be an alternate story to the origin of its existence.  In a period called the Grand Sequester, the gods, in their hubris, yearned to create a realm in their own image beyond the Edge of Creation.  Each of the gods sought to leave an unmistakable impression on the nascent realm, attempting to mold Myr’Nora in their own image.  The struggle for influence was a violent maelstrom of chaos.  Untold numbers of suns and moons devoured the sky as they struggled for a unique celestial stead.  With earth-boring cyclones and ravaging tempests, the four winds battered the world.  Knife-sharp rain and boulder-sized hail billowed from the sky as they sliced and blighted the land.  All the while, the land itself quaked and churned interminably in constant upheaval.  Drunk on the unmitigated freedom to express themselves in this newfound land, the gods raged endlessly.  Myr’Nora was a bedlam of divine energies inhospitable to even the gods themselves.  Nevertheless, in this crucible of pandemonium something inscrutable to the gods was born.

The goddess Glairmor, however, sensed a faint call from an alien and powerful divine presence.  She had been standing idly by in the hopes that her kin would achieve harmony of their own accord.  Spurred by a protective instinct for the newly realized entity, she intervened to broker unity amongst the gods.  When her equanimously diplomatic attempts were heedlessly ignored, she wrested Myr’Nora from their clutches.  In her haste, Glairmor severed the branch from the Tree of Creation from which she was born and grafted Myr’Nora into the tree.  The tree membranously grew around the realm sheltering it from the unbridled will of the gods.  This lamination would become known as the Xyle.  Through the Xyle the gods could continue to exert influence over Myr’Nora, but in a balanced and controlled manner.  This was Glairmor’s bestowal to Myr’Nora, but simultaneously her way of keeping a watchful eye on the new awareness the gods had created within.

Over the ages, as Glairmor tended to Myr’Nora, the Xyle grew around and into the world; it gave rise to the trees and plants that embrace Myr’Nora today. Furthermore, it was the first trees, much like the Tree of Life, whose fruit bore new life in the form of insects and other diminutive lifeforms. The Xyle is responsible for the cyclic nature of all life in the realm, from the day and night cycle to the seasons.  With Glairmor’s ever present guiding hand, through the Xyle she promotes harmony and order throughout all of Myr’Nora.

Druids are the custodians of Nature. In the service of preserving Harmony in the world, Druids shape a byproduct of the Xyle called Glint into their powers.  They roam the land looking for anything that might dysregulate the delicate cycles of Nature.

Druids are a part of a complex social order and advancements in it, afford them prestige and additional responsibilities. As Druids climb the social ladder, their function in maintaining Balance gains specificity and the Druid Grove that they join will provide the resources to fulfill that function.

While city-dwelling folks are more prone to seeking out the services of a Vicar, those in more rural areas seek out Druids. And, while Druids function much like clergymen, they do not preach but simply espouse the virtues of Harmony and respect for Nature and her children. Druids are known to be itinerant, never remaining in one place for too long.

The Druid is a leather wearing spellcaster who has at their disposal a wide array of area-based healing spells. They are often in possession of a large gnarled staff called a Tap Root. Through it, they can harness a power source known as Glint that effuses the Xyle. They command the natural elements to harm and hinder their foes. Additionally, Druids support their allies by enhancing their capabilities and impeding those of their enemies. Druids also have a degree of field control with their persistent area of effect hazards. To round out their capabilities, they gain access to the much coveted Veering spells which allow instant transport to and from Druid Groves throughout Myr’Nora. Their crowning achievement in this specialty is the ability to Veer to the otherworldly realm of Sideer Thuinn.