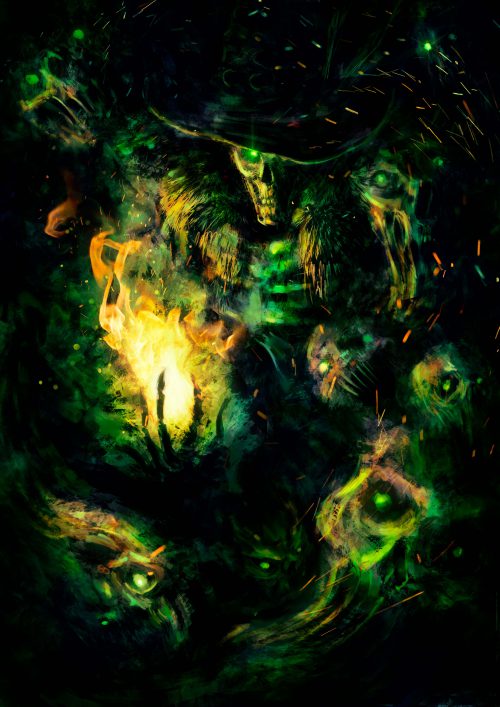 “A curious false truth or false equality has taken to the minds of the people of Myr’Nora—nigh ubiquitous in its pervasiveness. It is claimed or, perhaps more accurately, believed by the layperson that the Spirit and Animus are interchangeable concepts. This semantic conflation has denied the people a very fundamental understanding of their non-physical origins. The simple truth regarding the Spirit and the Animus, now only graces the rarefied erudite circles of Arcanists. This ontological truth, supported by spiritual and mythological texts from extant and extinct cultures as well as millennia of scholarly and arcane studies, provides these fact-driven denotations: The Spirit is the indelible psyche that passes on from one physical manifestation to another. The Animus, on the other hand, is a complex, textured potential upon which the physical manifestation sustains itself.

Animus is a highly complex energy that develops in lockstep with the Spirit and as such has a unique character to it not found in arcane energies directly drawn from the Twin Voids. It is inherently difficult to separate from the Spirit it enshrouds. However, when a Spirit abdicates its Animus, the Animus is left behind tied to the physical form, which is referred to as a Remnant. This straightforward universal law suggests there is a wellspring of Animus to be tapped into. After a fashion, there is. Unfortunately, the Animus is inextricably scarred by what is often a violent or struggle-fraught departure of Spirit, rendering it intrinsically corrosive and volatile to the spirit of any Arcanist attempting to manipulate it. There is no known way to psychically shield one’s spirit from the damage inherent to interacting with abandoned Animus.

Some five hundred years ago, Dargarresen the Bleak was a practitioner who attempted to reintegrate the School of Necromancy into the Wizard’s Arch. It is he who contributed to the foundational principles of Necromantic Paradigm as we understand it and devised many techniques for interacting with Animus without being tainted by it. This class of techniques later gave rise to Necromancy’s sister Paradigm, Anemometry. The semantic distinction was devised to differentiate the practices that were forbidden and perilous from those that were sanctioned and presumably safe. Unfortunately, the most profound results from Dargarresen’s studies, which involved manipulation of Spirit and Animus together, were lost when he was killed and his research destroyed in the Siege on Sahgorestous. Though, some hypothesize that he fled with his life and the Necromancy that survives today can have its lineage traced back to much of his lost work. There’s enough evidence to suggest this is naive and that Necromancy is far older than what we believe.

Necromancy casts an everlasting shadow on Wizardry. With the natural world abound in Animus, Necromancy’s laws are regularly rediscovered. Its true power and secrets are hidden in a clandestine body of knowledge scattered far and wide. It is this author’s belief that we have spun the tale that we as Wizards are tolerant of its existence, but the truth is we are unable to extirpate it—a reality with which we should come to terms. Necromancy is a seductive magic that ensnares many power seeking Arcanists. Though many break free of its siren’s song, some do not, traveling inescapably down the deep sordid path of the Necromancer. Necromancy mangles the mind, quickly robbing the practitioners of their moral compass. They are universally feared across Myr’Nora: not only  because they are powerful, but because they are bereft of scruples and because they hunger insatiably for that which liberates Animus—Death.”

Necromancy is a lonely craft. Its practitioners either live a double life, furtively engaging in the Necromantic Arts far from the scrutiny of others, or fleeing from the comforts of civilization to be fully absorbed by it. Necromancers have often relinquished what tenuous grasp they had on sanity long ago and as such, find it difficult to integrate with society. The repeated lesions on the psyche from constantly harnessing the power of Animus has transformed them into sociopaths and psychopaths.

In spite of their reclusive tendencies and antisocial predilections, Necromancers of sufficient ill-renown are, by special invitation, recruited into a secret society—The Dread Serpent’s Coil. In part, the name was created to simultaneously pay homage to the founder, whose moniker was the Ophidian, and to mock the Mage’s Arch. The parallels are not only in name. Both teach the magical arts and facilitate their research and much like there are Mage’s Arch, there are Serpent’s Coils. They are magically imbued underground monuments secreted away in once abandoned crypts and hallows. These marvels are crafted by the skillful hands of Deep Dwarves thanks to tenuous agreements with the Society. The Society’s many pecuniary benefactors are long standing aristocratic family lines who have supported The Dread Serpent’s Coil from its founding. These aristocrats, many who only have money to bring to the table, make rampant use of the Dread Serpent’s Coil for personal gain.

While Necromancers who join The Dread Serpents Coil are exploited for their talents, the Society is more than generous with its support for their research, presuming that they produce results. It provides its members an almost endless supply of hard-to-find resources. Necromancers are encouraged to immerse themselves in their work, however they are still ultimately pawns to the greater will of The Dread Serpent’s Coil.

In short, Necromancy has long been a commodity reserved for the rich and powerful. It wasn’t long that it’s studies were banned as Necromancy got into the hands of the commoners. Now it’s a cult knowledge of rich and powerful aristocrats with the occasional zealots hiding out in crypts and hallows. It’s secrets a taboo to most mages in the Mage’s Arch and a mere myth to common folk.

Necromancers are a pure caster whose single-minded pursuit in battle is scavenging Animus from the dead or dying. Much of the spells devised by Necromancers are dedicated to driving a wedge between the Spirit and the Animus. As such, they employ merciless techniques that focus on Decay, Disease and Toxins. With Animus free, a Necromancer’s fascination with rewriting the natural laws governing Life and Death takes hold. They can tap into the Animus of corpses to make them rise again as undead thralls or similarly, briefly raise a fallen ally to fight in an undead form. They can also use the Animus of corpses as a means of propagating their Disease and Toxins.

A Necromancer can also make use of their own Animus, a class mechanic called Quietus, to fuel a variety of abilities not normally available to them. The more harm they endure, the more available their own Animus is. With this ability, they can cheat death by continuing to function even when at negative hit points. They can outright steal the life of their enemies and add it to their own. They can make Toxins heal and Diseases beneficial. They can even momentarily make an ally appear dead. Importantly, they can consume unbound Animus to replenish their own.

Finally, Necromancers provide non-combat support with the ability to track allied corpses and even summon them to their position. They can also set wards on dead enemies to trigger contingency spells or shroud allies in an aura of undeath, aiding them in escaping notice by undead.