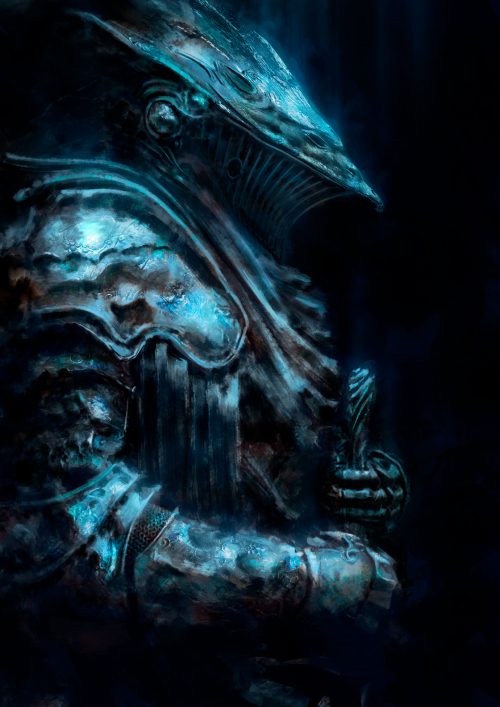 Letter home during the War of the Brothers – Battle of Ridgecrest, From the Royal Archives in Dale

“Father, this morning I wholly believed I wouldn’t be alive writing this letter this very night. Captain Thornwright did manage to give an inspiring speech at morning muster, but we all knew that we were the last line of defense standing between the army of Selemon and the capital city of Dale. Stories and rumors were going around camp that the breaking front lines were being crushed by Emperor Rynus. Our armies weren’t prepared for the onslaught of Selemon’s unconventional means of warfare. Their unyielding ogre ranks crushed the front lines of our rookie recruits; their war elephants trampled over our cavalry like ants. We’ve seen the wounded coming into camp with a look in their eyes as if they’ve been through Hell. Defeated, shaken, our fate was now in the hands of Kordale.

The rain started right as we lined up on the hill looking over the country. Peaking in the distance was the snaking line of the Selemon army. Their war drums were pounding with such ferocity that our hearts would skip a beat to line up with its rhythm, our breaths becoming rapid, labored, and shallow. Our artillery was firing out of cadence while sergeants were barking orders for the men to get back in line. I’ve never seen the men’s hearts so low, with no hope.

Then that’s when we heard it — the wailing horns of the King. And peaking over the hilltop behind us was the royal standard. The King, OUR King, and his vanguard were marching over the hill in perfect cadence. I was surprised with awe as the King’s ranks filed in front of the entire army. Who would’ve thought that young King Albert himself would fight alongside his fellow countrymen? His vanguard of over two hundred men were fully clad in armor, polearms at the ready. King Albert himself was carrying a shield with a spear in hand. They stood there, silent…. waiting. When the battle started we could feel the morale of the men rise as King Albert and his men pulverized the Selemonite army. It was like watching the ocean waves breaking on the rocks at Lyon’s Keep. Not even the ogre ranks were a match for their ferocity on the battlefield. I’ve never seen a spear more true than that of King Albert’s.

Father, today marked the turning point of the war. The men’s spirits haven’t been this high in years. King Albert gave a speech after the battle and told us that we will do the impossible and push back the armies of Selemon, and seeing what I saw today of him and his vanguard I believe him. Tomorrow we march towards the enemy encampment. Wish us luck father. – Your faithful son, Albis”

Fully clad in plate armor and wielding polearms, Vanguards are a devastating force on the battlefield. The core of any army, without them the battle is already lost. A natural veteran to warfare, their armor is marked with evidence of their ability to survive combat. Vanguards come from all walks of life as proving oneself in battle isn’t reserved for the wealthy. Vanguards hail from every corner of the world as farmers, merchants, orphans, sailors, blacksmiths, and any profession you can think of. They train their entire lives in the art of war and this makes them a tidal force in battle.

Vanguards take several paths in life. The obvious path is their continued commitment to an army. But Vanguards know their worth and most become mercenaries for hire, able to accept their own fate, for the right coin. They even become hired bodyguards for the rich and powerful and serving rulers of any kind, including kings. When a Vanguard enters town they are saluted and hailed as there is never any reason to not show them your respect, for they have earned it.

Vanguards are melee fighters who dominate the battlefield in plate armor. They prefer wielding polearms such as the hallebarde, bardiche, partisan, and lucerne hammer to maximize their reach and their damage. However, they are also known to wield a spear with a shield for added defenses when needed. Their expertise with drawing the attention of multiple enemies makes them a great asset to any party. They use trips, knockdowns, and pulls to keep their enemy exactly where they want them and nowhere else. They can mitigate incoming damage better than any other tank class making them a living shield to their allies.