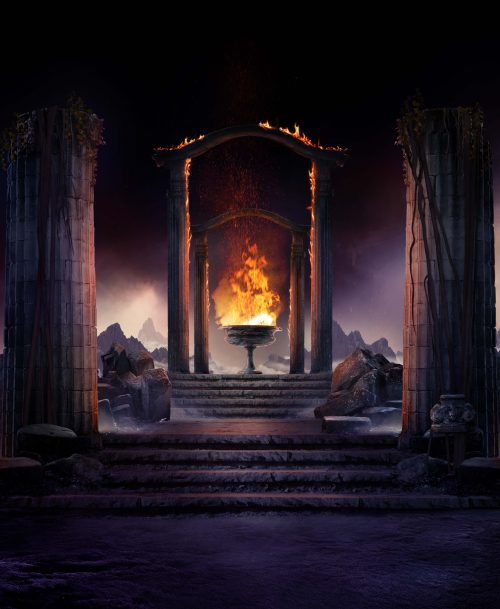 No one knows for certain who the oldest Magnitheon is but Lethaniel is known to be one of the eldest. He was created while the primordial energies were forming around the Twin Voids and the Tree of Life was still but a sproutling. After some ages passed, Lethaniel would go about bringing order to what was once chaos. Being able to manipulate the Tree of Life’s energy to shape its creations of life, this ability naturally led him to a position of power amongst the other Magnitheons.

Even the eldest of the Magnitheon isn’t free of imperfections. Another Magnitheon by the name of Krawl was believed to have hacked off a limb from the Tree of Life which caused it to wither away and stop bearing fruit. Lethaniel, along with the other Magnitheons, decided to punish Krawl for this and together put markings upon Krawl which would limit his power. This wrongful injustice led Krawl down a path of revenge. It wasn’t long before Krawl regained some of his lost power by destroying Lethaniel’s first born creations known to be Lethaniel’s children.

Lethaniel represents truth, defending the weak, and rightfully punishing the wrong. Execution is never a solution in his eyes and with his retribution awaits mercy for those willing to change. Because of these guidelines of morality it was only natural that the canon for Lethaniel is also in part the book of law in most cultures. The true, original holy text of Lethaniel is a book so massive it would take many to carry it. Often ceremonies are re-enactments representing this feat of burden as a necessity to maintaining order. Some followers go as far as making pilgrimages during which they carry large rocks and obelisks by hand across long distances. Because of this, the land is dotted with obelisks dedicated to Lethaniel, even in the most unlikely of places such as mountain tops. The original canon for Lethaniel is in an unknown location lost during the Age of Reconstruction.

Lethaniel is commonly worshiped by Knights, guards, judges, and the honest who put the truth above all.